It was a very long wait for my Cheerson / Sanlianhuang CX-10W I ordered from Banggood.
The drone was erroneously sent to Georgia (Country Code GE) rather than Germany (Country Code DE). This had never happened before with any of my deliveries and after just two short chat sessions with a support person, they re-sent it.

I charged it up and did a first flight. Coupling the iPhone and the CX-10W was not a problem at all. It presents itself as an unencrypted access point.
My idea was to sniff the WiFi communication with a Fluke OneTouch AT3000 I have at work and see if I can make any sense of the protocol. But it never came to that.
After an 8 second flight (of which I have a nice recording on my phone), the craft cut out completely and dropped out of the sky. - The sky being about 1.5m up.
It wouldn't turn on afterwards, so took it back home to my workbench.

Although unlikely to be the cause, the first step was to recharge the battery. I plugged in the charge cable, but the charge indicator wouldn't come up. What did (literally) come up was the white/blue-ish smoke so well known to every seasoned electrical engineer. It came from the charger.
As I knew from earlier investigations, the charge cables of most minidrones are essentially 2.2 Ohms resistors and an indicator led that comes up when the voltage drop over the resistor is low.
The transistor has desoldered itself from the PCB and the 2.2 Ohms resistor looks like it has radiated quite a bit of heat, as well. 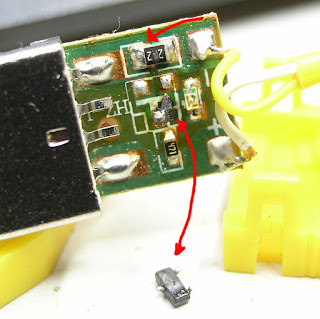 So why is that so? Looks like way too much current has made it's way through that charge cable. The reason for that should be easy enough to find.

You need to have the tongue at the right angle to probe the pins of the CX-10's charge connector.
0.3 Ohms? Ok, here's the reason for the burned-up charger. Such a blatant fault should be easy to locate. But these drones are tiny. So to have a proper look, I took this close-up photo:
See? There is something green wedged under the shell. We need to look still closer.
This looks like a bundle of green enameled wires stuck between the top shell and the PCB. What adds to the problem is that the switch probably scraped and/or pushed the wire to the side, scraping off the enamel.
For the moment, that was enough for me to stop investigating and to inform Bangood's support to have it replaced.

Edit - Two good news:
a) Banggood has sent a replacement after a short exchange of mails
b) The short was easy to locate and fixed, rearranging the wires and insulating them with a short length of Kapton tape