This is more like a "note to self", so I remember next time. (Just like the CF-card now does.)

At the media company I work for, we shoot tons of videos and pictures. From time to time something is bound to go wrong.
A colleague who had been at the site of an accident approached me with a 16GByte CF card that mysteriously died on it's way from the camera to the PC's card reader.
Windows only offered to format the card.


Linux to the rescue!

I usually use linux to dd / dd_rescue stuff to a file and work from that. No luck here: 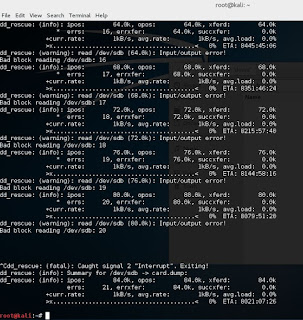 Linux didn't like it at all, reporting multiple errors in syslog. fsck complained about a missing superblock. Nothing worked and I had no time for more investigations.

Windows to the rescue!

So it seems like the file system is badly damaged, possibly with some physical damage to the memory card. Here is how we got the data back:


That was even easier than my usual Linux approach.

The CF-card can't be trusted any more and will be destroyed.

Apple iPad charging slowly or discharging when plugged in

The media comany I work for presents their IOS apps on local fairs from time to time. I had reports from the ladies presenting the apps on iPads, that they were not charging or even discharging despite being plugged in.

Having nothing better to do on a Friday afternoon, I drove to the fair, equipped with a few spare iPads and power supplies, to see for myself what was going on.
It took me a few minutes to dig my way into the three vandalism-proof iPad stands and get hold of the power supplies. A closer examination of the power suppies made things clear:

Although Apple has it on their web site, I was not aware of the fact that there are three different power supplies out there. All looking the same.

Watts: Better to look at them, than to look for them.

The 5W adapter apparently came with an iPad mini, while the 10W adapters are for all iPads without retina display.

With a 10W adapter, an iPad with retina just seems to be able to hold it's charge at reduced screen brightness. A 5W adapter is just useless to keep an iPad retina on constantly.

I replaced all chargers with 12W models. All iPads charged up ok, leaving some happy people to work through the weekend on the fair.

Win10 and TrendMicro OfficeScan - ANOMALY: use of REX.w is meaningless

For a few days now, I get the message:

when calling pretty much any network related command in a cmd-shell. This is the case for both normal and elevated shells.

The symptom went away when disabling TrendMicro OfficeScan on my machine.

It probably came with the latest patch from TrendMicro to provide compatibility with Win10 anniversary edition:

Apart from that, there are no negative effects on my system so far.