Podcasts or audio books are a great way to start a good night's rest. And five to ten minutes of listening is usually all it takes to knock me out. Pretty much regardless of the content, as long as it is not music. (Music is too engaging. I'm funny that way.)
Earlier this year, the company issued new iPhones for the employees, and I got a shiny new iPhone 8. Which is, unlike the iPhone 6s I had before, water proof. Clearly a plus for a runner and long distance hiker. (Please excuse the poor job google does translating that. I write for a German audience in that blog.)
But now the 3.5mm phone jack is gone and I love my trusty old earphones.

Apple offers a lightning to 3.5mm headphone adapter at an amazingly low price. (For an Apple product, that is.) But from the very poor (if not devastating) reviews it received, I concluded it was useless. So I looked for alternatives and found this one:


I got the Hoco ls6 from my trusted Chinese source here. It is much more sturdy that the original Apple adapter and has the added benefit of having a charge port.
The only downside I found so far was, that it is poorly shielded against RFI picked up by the headphone cable.

At night, I set the iPhone's timer to end playing after 15 minutes, plug in my favourite (because of their low profile) Sennheiser CX 300 in-ear headphones and fall asleep almost immediately, only to find my phone's battery almost empty about seven hours later.
Listening for 15 minutes can't be that bad, and I haven't seen the phone discharge that quickly with the screen off, especially in power save mode.
This is not a huge issue, but worth investigating. The "battery" menue in the settings now is a lot of help when dealing with power issues.
After 24 hours of moderate use, the charge graph of the phone looked like this:
I think it is pretty obvious: The adapter uses some of the phones power. This is not amazing as such. There is a nice analysis over on ifixit.org that shows the details of what it takes to get audio in and out of the lightning connector.
From what we see here, it looks like the adapter does not play well (if at all) with the iphone's power management. From the moment it is plugged in, it appears to draw a constant current. Actual use does not seem to make a huge impact:

This means that the adapter does not play well with the iPhone's otherwise very elaborate power management.
Some sites claim that the ls6 is mfi certified by Apple. The phone does not show a warning message, so that might well be true. But I can't find the adapter in Apple's database here.
All of this raises a few questions:

Edit 20181228:
I have tried the same with the original earpods (i.e. the ones with the lightning plug). This looks like a much more efficient setup.
The discharge during the night is a lot lower. The curve drops in the morning when checking the night's mail and social media.

Looks like I have to get myself an original Apple adapter for my Sennheiser earphones.

How to fix iPhone drivers manually

I installed the latest version of itunes (Dec 2018 - 12.9.2.6) from the Microsoft-Store. This was the first time I did that. All previous updates were either direct downloads or downloads from within iTunes itself.

Previous iTunes installers had uninstalled older versions and installed both the device drivers and iTunes. The version from the Microsoft-Store app removed the old iTunes and it's drivers, but did not install new device drivers.
This error message came up:

Although the error message in iTunes suggests trying windows-update, it really is the device-manager that does the trick. You can call it directly from the command line with: devmgmt.msc 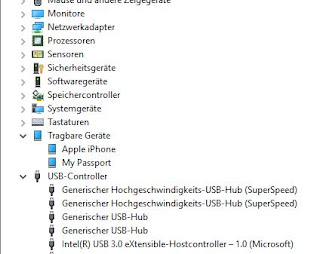 And sure enough, there is an Apple iPhone listed there. But that is not sufficient. Right-click the iPhone and click "update drivers". Let the PC look for drivers on the internet. 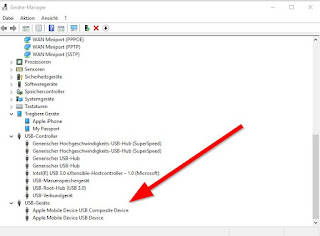 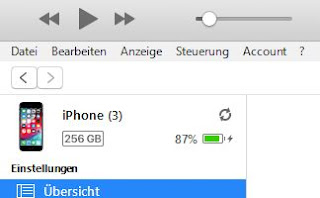 It is not quite clear to me why the installer from the Microsoft-Store behaves that way, but anyway:
Problem solved.
Posted by ARe at 18:12 No comments: