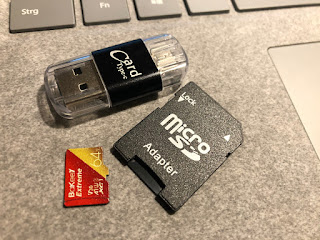 For the card and the two adapters, I paid 10 USD. That appears fair for the set, but cards with similar specs are available from Transcend or Kingston in the same price range. An ok deal, but no need to rush. For my camera, I'll stick with a SanDisk Ultra that guarantees 40MByte/s for 4K recording.
All in all nothing to write home about.
Posted by ARe at 23:31