Trend Micro OfficeScan ANOMALY: use of REX.w is meaningless - SOLUTION(not quite)

As described here, our Windows 10 "Anniversary Update" (aka "Redstone) machines suffer from a minor flaw:

Reader "seno" commented, that TrendMicro sends out a patch on request.
After a few minutes with TrendMicro's support, they sent me a download link for the patch.

The next day the colleague in charge of the server sent me this disappointing screenshot:

I should have guessed that from the "_en_" in the file name.
So I went back to TrendMicro's OfficeScan support and complained. They told me that their developers were working on a German version of the hotfix and that they'd let me know when it is available.

If you have an English installation, you should be fine with this patch.

Flying FPV on a shoestring budget

Over the time I have acquired quite a few microdrones. But none of that enabled me to fly FPV. (FPV = First Person View). Although the CX-10W should do the trick, flying with an app, I was never quite happy with it.

Here is the VIDEO on both the build and flight.

There's an app for that

I discovered that there is an alternative to the IOS app recommended by cheerson. It looks like it is from the same makers, but has some extra features. - Like 3D view. Well... not really, if you have one camera. But it gives you two images to view through a "google cardboard" compatible viewer.
There are several "FPV" apps on the appstore. The one you're looking for goes by the name "WiFi FPV" and is from "Le Wei Technology".

While that is all well and good, I don't like controlling the CX-10W with the app, which doesn't work anyway with the phone a few cms in front of your eyes. But I still have the remote control of my CX-10A, which is compatible with the CX-10W.

Apart from that, I need some duck tape, three safety pins and the head band from a broken LED head lamp to make my well used google cardboard clone wearable. I had these for quite a while and they are not available any more. These are probably an OK replacement. And they already come with a strap.
I attached the safety pins to the goggles, so I can remove and adjust the strap.
Tooo easy....

Here's how to set things up

And you're good to go!

There was a very slight wind from NE and the temperature was around 10C, which already affects the battery capacity. Still, I got a few minutes of flight out of the CX-10W.
I did not find flying easy. Despite the fact that I do hold a sport pilot's license and should not easily be confused by a couple of turns, I lost track of the drone very quickly. I had the feeling that I lost the video stream very often, but it did not look so bad on the recording.
Although the grass was freshly cut, it was hard to locate the tiny drone when it crashed.

A project that didn't cost me anything, didn't take long and was a lot of fun.
Things probably would be easier if he drone held it's hight. The newer model with a barometric pressure sensor for automatic "height hold" is only a little more expensive. I don't have one, but if I had to buy one, I'd go for the CX-10WD in the version with the remote control.

Too many local users

One of our Surface Pro users was unable to connect to our Vpn with his Cisco Anyconnect (3.1.10010) client.
The message was clear: He was not alone on his machine and blocking such a machine makes sense (e.g. in a terminal server environment). 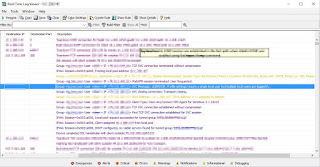 The error message on the client was:
AnyConnect profile settings mandate a single local user, but multiple local users are currently logged into your computer.  A VPN connection will not be established.

The task manager's "Users" tab did not show any additional users on his machine.
But there was one additional session visible in the command shell:

Power of the shell!

The inactive "Session 1" should not be there.
To find out more about it, we need PowerShell:

The user could not kill any of there processes in the task manager. But PccNTMon is part of Trend Micro' Office scan.

Anyconnect then connected without problems. - Ok as a one-time workaround, but not acceptable as a permanent solution.